So this post is going to be a little different than the normal beauty posts that I make but I wanted to share a little bit more about my life adventures! About a year ago, my Nana took my whole family on a vacation to Hawaii. It was the most amazing vacation of my entire life. We just did so much but also took it easy and spent a lot of time as a family. But one of the things that David and I did was go on a kayak tour through a river in Wailua Homesteads. The river came to an end and then we took a small hike to the Secret Falls which is a hidden waterfall.

I had been kayaking before then but after going in Hawaii, David and I were super inspired to get our own kayaks. So the very day that we got back from Hawaii, we went to Dick’s Sporting Goods and got our own! We haven’t used them as much as I would like but we did go yesterday and had a lot of fun!

David found a nice kayaking and canoe launching point behind this random business park. You would never expect a park and river behind it. The river was called Trinity River. It was super secluded, we didn’t see anyone else on the river and we only saw a few other people in the park, shooting bows, right when we were leaving.

We did have to carry out Kayaks through this wooded path to the launch site. Right around where you launch, are some steps that bring you down to the site of the river which was so nice because it was pretty muddy on either side of the steps.

The river was pretty low yesterday so I thought it would be easier to get in the kayak off of the steps but it was so muddy that I slipped and ended up losing my shoe in the water. David tried to search for my shoe and ended up losing his shoe in the mud for a second. Luckily, he was able to get his shoe out right away which mine remained under water. I went ahead and stepped back up on the steps that were provided and David helped me get into my kayak and as I floated a little bit away he went back and dug my shoe out of the mud!

It was a little bit of an adventure just to get in the kayaks which is pretty normal when you are in a new spot. I was just happy that we were alone so we could take our time!

We kayaked up the river and ran into this part that had a bit of soft rapids. It was impossible to get all the way up them but David got pretty far and I just kept paddling up as far as I could and then riding it down. I probably did that 5 times. 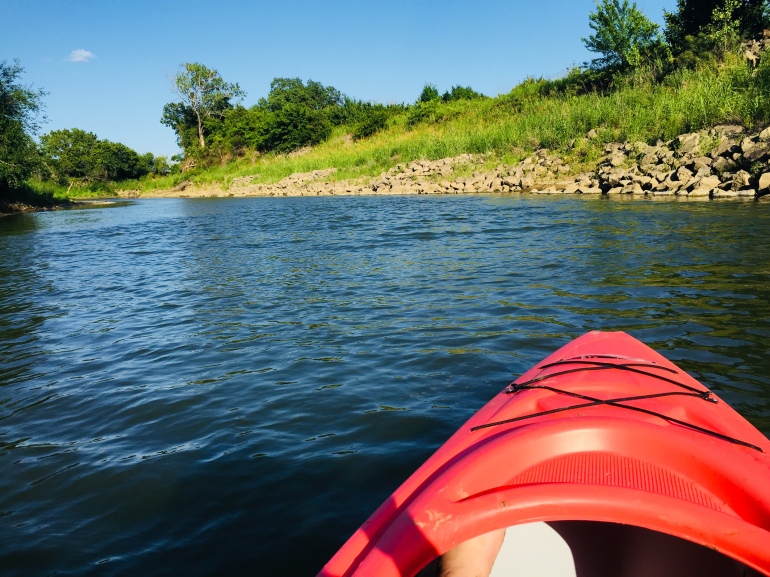 Overall it was a fun day! I was so happy to bring our kayaks out finally! Let me know down below what your favorite summer activity is!